A third-way that works. 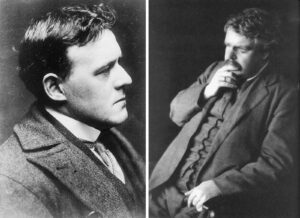 Distributism is an economic and political philosophy that is an alternative to both capitalism and socialism.

Distributism is an economic system in which a country’s trade and industry are controlled by as many private owners as possible for the purpose of self-reliance for its citizens.

Distributism is concerned with improving the material lot of the poorest and most disadvantaged. However, unlike socialism, which advocates state ownership of property and the means of production, distributism seeks to devolve or widely distribute that control to individuals within society, rejecting what it saw as the twin evils of plutocracy and bureaucracy.

The ownership of the means of production should be spread as widely as possible among the general populace, rather than being centralised under the control of the state (state socialism) or a few large businesses or wealthy private individuals (laissez-faire capitalism). As Chesterton said, “Too much capitalism does not mean too many capitalists, but too few capitalists.”

Some have seen it more as an aspiration, which has been successfully realised in the short term by a commitment to the principles of subsidiarity and solidarity (these being built into financially independent local cooperatives and small family businesses).

Naturally, it follows that Distributism favours the principles of industrial democracy and the cooperative model of business.

Distributism puts great emphasis on the principle of subsidiarity. This principle holds that no larger unit (whether social, economic, or political) should perform a function which can be performed by a smaller unit. Thus, any activity of production (which distributism holds to be the most important part of any economy) ought to be performed by the smallest possible unit. This helps support distributism’s argument that smaller units, families if possible, ought to be in control of the means of production, rather than the large units typical of modern economies.

Under such a system, most people would be able to earn a living without having to rely on the use of the property of others to do so. Examples of people earning a living in this way would be farmers who own their own land and related machinery, plumbers who own their own tools, software developers who own their own computer, etc. The “cooperative” approach advances beyond this perspective to recognise that such property and equipment may be “co-owned” by local communities larger than a family, e.g., partners in a business.

This does not suggest that distributism favours a technological regression to a pre-Industrial Revolution lifestyle, but a more local ownership of factories and other industrial centers. Products such as food and clothing would be preferably returned to local producers and artisans instead of being mass produced overseas.

The kind of economic order envisaged by the early distributist thinkers would involve the return to some sort of guild system. The present existence of labour unions does not constitute a realisation of this facet of distributist economic order, as labour unions are organized along class lines to promote class interests and frequently class struggle, whereas guilds are mixed class syndicates composed of both employers and employees cooperating for mutual benefit, thereby promoting class collaboration.

Distributism favors the dissolution of the current private bank system, or more specifically its profit-making basis in charging interest. Dorothy Day, for example, suggested abolishing legal enforcement of interest-rate contracts. It would not entail nationalisation but could involve government involvement of some sort. Distributists look favorably on credit unions as a preferable alternative to banks.

The Democratic Labour Party is the only political party in Australia that espouses Distributism.

“An Introduction to Distributism” by John Médaille

“Distributism: Economics As If People Mattered” by Peter Chojnowski

Wolff, R 2012, “Yes, there is an alternative to capitalism: Mondragon shows the way”, The Guardian

YouTube Video: “The Mondragon Experiment” (a good insight into industrial democracy and the cooperative model of business)