You are here:
2019 Federal ElectionNewsPoliciesPolicy Spotlight 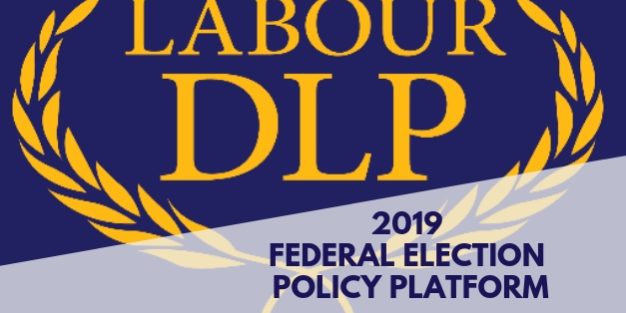 The Federal Executive of the Democratic Labour Party (Labour DLP) has confirmed the Party’s key policies for the 2019 Federal Election. These fall under two main categories: policies to support the family and to support the nation. Together with the Labour DLP Principles, these form the Platform for the 2019 election campaign. More details about DLP policies can be found on the Policies page.

Policies to Support the Family

Income tax splitting
Allow couples to split combined income 50/50 for tax purposes. Families with one breadwinner or one full time and one part time will reduce their annual taxation and increase their available spending capability.

No Death Tax or Inheritance Tax
Such taxes impose a burden on a family’s future security and are totally unnecessary.

Family Wage
Support for the minimum wage to return to the original concept of a family wage which recognizes the responsibility of wage earners to provide adequately for dependents. For almost 80 years, the rate was set at the amount necessary for an unskilled worker to support a partner and three children and to meet their basic needs including food, clothing and housing.

National Student Credit Scheme
Give families control of a funding credit to be transferred to the school of their choice on the enrolment of their child. This provides parents with the right of fair choice and acknowledges parental control. Home schooled children would receive a pro-rata student credit.

National Public Housing Scheme
Bring all public housing under permanent Federal control with national low-income rental rates set at 25% of earnings and 15% for occupants with a disability. No future selling off of public housing should be permitted.

National Housing Affordability Scheme
The purchase of residential land should be limited to Australian citizens and permanent residents. Current foreign owners will have up to 10 years to sell their Australian properties.

Negative gearing arrangements should remain as is for the first investment property. A sliding scale should then reduce ongoing tax benefits by 10% on the 2nd property, 25% on the 3rd, 50% on the 4th, 75% on the 5th and 100% on all further properties.

National Addiction Taskforce
A nation-wide taskforce to address the growing problem of access and addiction to drugs, gambling, internet pornography and other harmful addictions that lead to family breakdown, gang violence, anti-social behaviour and violence against women.

Cooperative Child Care
A program in which parents and carers are trained to be certified “child carers” in their local neighbourhood and community.

Ethical Health Care
We oppose the ALP’s policy of withholding funding from hospitals that refuse to perform abortions. Taxpayer funds should not be used as blackmail.

National Sports Insurance Scheme
A national scheme to cover sports injury insurance for children and students under 19 who participate in a regulated sporting activity.

Policies to Support the Nation

No Taxpayer Subsidies as Profits to Private Energy Companies
No subsidies should be paid to any private energy provider – if it is not economically viable, then we should not be supplying profits to private owners. Redirect all subsidies to Health and Education funding and reduce overall taxation.

Restore Public Ownership of the Public Utilities
Despite promises of cheaper power, gas, transport etc., the costs to Australian households have escalated with profits flowing overseas. Power, gas, water and public transport infrastructure must return to public hands and the profits should go to consolidated revenue to reduce taxes and rates.

Restore Manufacturing
Withdraw from the 1975 Lima Agreement that has forced Australian companies offshore at the cost of hundreds of thousands of Australian based jobs.

National Employee Ownership Scheme
A scheme to assist employees in purchasing their employer’s business when it is put up for sale, rather than losing the business and jobs overseas. This would give employees a first choice to purchase the business they are employed with if that business is being sold. The scheme would provide business and financial advice and establish an employee ownership share market allowing easy access for community funding from Australian investors.