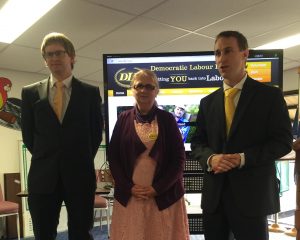 Senate candidates Paul McCormack and Dawn Willis, along with the candidate for Newcastle Stuart Southwell, announced several policies that the DLP will be pursuing in this election and in parliament if elected. Mr McCormack explained that, as it has been in the past, the DLP could once again be a responsible balance-of-power party in the Senate that placed the family and small business at the centre of Australia’s economy and society.

Housing affordability was raised as one of the most significant issues facing Australians, with Mr Southwell stating that “home ownership should not only be for the rich or two-income families.” The DLP announced it would reduce housing costs by restricting foreign investment into the Australian residential market through taxing foreign investors, with other measures to be investigated.

Senate candidate Dawn Willis spoke passionately about the DLP’s support for a plebiscite on marriage. The DLP provided the Liberal party with legislation calling for a Marriage referendum three days before former Prime Minister Tony Abbott announced his intention to seek a referendum or plebiscite on the matter. The DLP hopes to see that legislation brought up in the next parliament.

The “Safe Schools” program is also clearly in the sights of the DLP. Mr Southwell and Mrs Willis stated that, while youth suicide was a significant issue and bullying was never acceptable, “Safe Schools” had nothing to do with bullying and was simply designed to indoctrinate children into the radical sexual and gender ideology of the Greens. Mr Southwell also argued that the Greens’ education policies attacked the “right of parents to choose the kind of education that shall be given to their children.”

Mr Southwell criticised political correctness, stating his concern that our society was starting to value “Freedom from speech more than freedom of speech.”

The Democratic Labour Party is in column H of the NSW senate ballot paper.