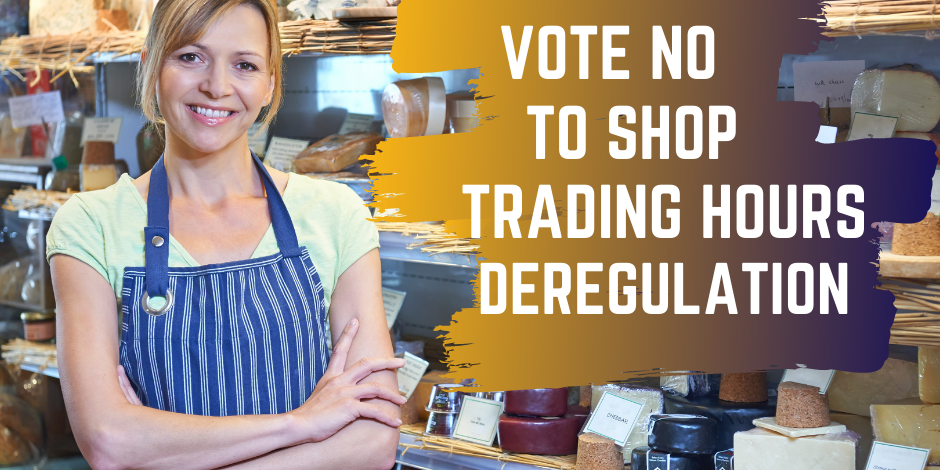 Vote No to Shop Trading Hours Deregulation in South Australia

The South Australian Liberal Government is introducing legislation into Parliament to create a referendum on the Shop Trading Bill 2021 at the next State Election. Whichever party forms Government will be bound to enforce the outcome of the vote. A ‘yes’ vote will see the Bill passed, repealing the current shop trading hours restrictions in the State.

Under the current regime, businesses with a larger trading area have restrictions on their opening hours, particularly in the late evening and after 5pm on weekends, as well as on public holidays. This allows smaller convenience stores and family-owned retailers to take advantage of extra trade at these times, enabling them to survive and continue to support local jobs and communities. Meanwhile, employees at larger retailers are able to take time off to be with their family and enjoy much-needed rest and relaxation.

The Bill would dismantle these protections, permitting larger retailers like Woolworths, Coles and Aldi to open whenever they choose, requiring employees to be available for much longer periods during normal trade and on public holidays. Small family businesses and many independent retailers would also lose a key competitive advantage and many would eventually be forced to close.

This will have disastrous short and long-term effects.

The bargaining and buying power in the South Australian retail industry will shift to the big end of town, giving customers and workers less choice. Family and small businesses generally invest more into their staff, paying a higher ratio of their earnings in wages. If the Bill is passed, many of these stores will close, and only a fraction of the employees will be able to find work at the bigger retailers.

Smaller businesses also tend to be much more supportive of local manufacturers and suppliers. If independent retailers close, there will be a significant flow-on effect into the wider state economy, placing more jobs at risk.

As a Party that stands up for local manufacturing, small businesses and workers, Labour DLP will stand with the SDA and South Australian Independent Retailers to say “Vote No” to the Shop Trading Bill 2021 at the next State election.

We will advocate for alternative provisions that allow all retailers to compete with online retail, but we will never sacrifice the rights of employees and small businesses.

If you want to join the fight, please consider going to www.dlp.org.au and becoming a member or supporter. The bigger our voice, the better we can fight for our State.