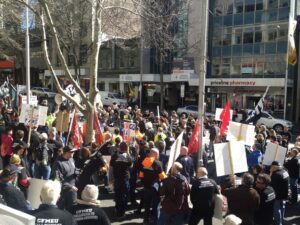 One would think that if there’s one thing the Australian Labor Party would do, it would be standing up for Australian workers. Apparently not so.

Let me take you on a trip to the Latrobe valley in Victoria. Just past Moe, we arrive at the Yallourn power station, which supplies the State with over 20 per cent of its power supply.

Energy Australia, a subsidiary of the Hong Kong-based China Light and Power, has locked out the unit control operators at its Yallourn power station, without pay, for the last seven weeks.

The company first locked out the 75 workers on June 21 after failed enterprise bargaining negotiations on conditions and shifts. These workers are members of the Construction Forestry Mining Energy Union (CFMEU)

Just after the lock out began, the workers were the subject of a disgraceful allegation that they had something to do with a fire in a circuit breaker. Energy Australia allowed this smear to circulate and it became front page news in the Herald Sun. However, it was later found that the fire was an accident, most likely caused by poor maintenance. The workers are yet to receive an apology.

These locked out workers are highly skilled – there is a worldwide shortage of unit control operators and these blokes could get highly paid work anywhere there are power stations in operation.

Energy Australia wants the Federal government to buy out the power station and close it down. Energy Australia is refusing to include consultation, staffing levels and job security clauses in the EBA – some of the major sticking points in the dispute with the workers. 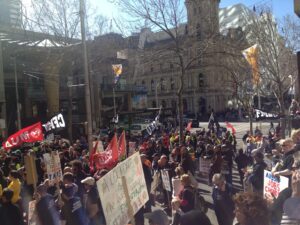 Meanwhile, 75 workers are locked out of their workplace without pay and Energy Australia is refusing to negotiate.

These workers have families and mouths to feed.

DLP Senator John Madigan has travelled to Yallourn to where the workers have been locked out, bringing along food, supplies and even some financial aid. The workers were extremely grateful that they had the support of a politician, not just by words, but by action too.

Senator Madigan has tried hard to get the Victorian Government to have a better understanding of the situation, and even wrote a personal letter to Deputy Premier Peter Ryan. However, not only did Mr Ryan rebuff the invitation, he launched a scathing assessment of the workers’ stance in a reply that contained factual errors and oversights on key aspects of the issue.

“Mr Ryan accuses the CMFEU of militant behaviour, yet the workers are merely seeking conditions that have been taken from them over a period of time … Contrary to Mr Ryan’s claims, a case could be made that it is the employer – Energy Australia – that is acting in a militant way by locking out these workers.” Senator Madigan said.

In the midst of all this turmoil, the Australian Labor Party is nowhere to be seen. The party that claims to be the workers party has refused to stand up for the workers.

Not one single ALP politician even attended the “A lockout is a cop out” rally in Melbourne on Friday in support of the locked out workers and their families.

The Democratic Labour Party, on the other hand, has been standing side-by-side with these workers all along.

While Senator Madigan was an apology at the rally due to being in Adelaide for an Industry Day promoting Australian manufacturing, farming and food processing, the DLP’s Victorian senate candidate Mark Farrell addressed the crowd on behalf of Senator Madigan and the DLP, to the applause and gratitude of the workers who know the DLP is out there to support them, just like any genuine labour party should.