The asylum seeker issue: it’s time for our politicians to grow up

You are here:
Asylum SeekersFeatured 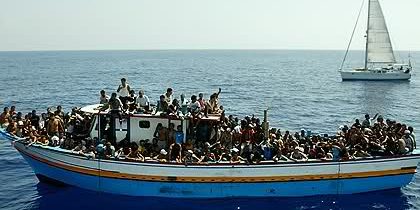 The failure of the major parties in relation to illegal immigration reform is nothing short of astounding.

On one side you have the Australian Labor Party who promised to create a more humane system which would better balance the rights of boat people and the Australian population. While they undoubtedly meant well, the reality is that under their leadership more boats have arrived then ever before, more asylum seekers have died at sea than ever before and conditions for refugees in detention have not improved dramatically from the Howard years.

Their attempts to fix the problem have stunk of political necessity rather than a genuine want to resolve the issue.

Now Kevin Rudd has come out and tried to claim that turning back the boats could cause war with Indonesia in an attempt to gain back ground from Indonesia, yet again proving that he is more interested in scoring political points than actually coming up with a workable solution.

On the other side of the aisle you have Tony Abbott who has simplified one of the most complex issues facing Australia today down into three words: “STOP THE BOATS”. I mean, honestly, how can he expect us to take him seriously when a catchy campaign slogan is all he wants to ever say on the issue.

It is an insult to those who have died, to those in detention and to all Australians when he takes such a pivotal issue for our nation and pretends he can fix it as if by magic. The policies he is willing to talk about often lack detail and again reek of political opportunism.

While turning back boats may not be about to cause us to go to war with Indonesia, it certainly isn’t as simple or as straightforward as the opposition would have you believe.

Finally, you have the Greens who’s irresponsible policy of getting rid of mandatory detention all together clouds the issue and makes finding a bi-partisan solution much harder. Not only are their policies politically unworkable, they are not practical in the real world. Obviously we cannot allow just anyone who comes on a boat strait into the Australian community, security checks and the like need to be done.

By taking a holier-than-thou attitude, what they are actually doing is making a resolution harder to come to and the lives of boat people harder.

Everyone needs to stop using the asylum seeker issue as a political play thing. There is no easy answer. There is no quick fix and the reality is that while everyone treats this as a partisan issue it will never be resolved.

We are talking about peoples lives here, it’s time Australian politicians grew up and gave the problem the respect it deserves.