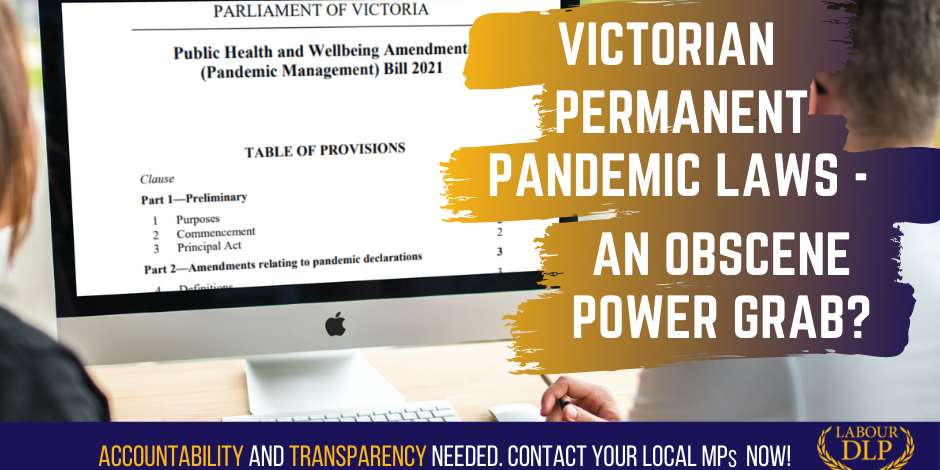 Are we entering an era of pandemics? Or is this an obscene power grab?

The Victorian Public Health and Wellbeing (Pandemic Management) Bill 2021, recently introduced into parliament, is ostensibly designed to protect citizens from the harm of pandemic disease.

The powers to detain, restrict or prohibit movement or gatherings are extensive and intrusive.

The Opposition and Independent MPs did not get a copy of the actual Bill until it was introduced into the parliament. They were then forced to debate this 116 page long, detailed and complex piece of legislation immediately, without adequate time to consider its implications and how it will operate. The lack of consultation and information about the specifics of the proposed powers is an abuse of our parliamentary democracy.

The time allowed for debate was severely restricted. It was only debated in any detail for several hours over two sitting days. The government refused to allow further time. This was strenuously objected to by Coalition MPs. Why the rush? MPs usually are given time when a Bill is introduced to consider the proposal and to consult with advisors and stakeholders before coming to a view to present in a full debate. There is no urgency about passing this Bill before wide-ranging and vigorous debate about such an important matter. There is adequate power already under the current provisions of the Public health and Wellbeing Act to manage the present situation. And the Premier can go back to the parliament in December when the current emergency powers expire and show the need for and declare a further state of emergency.

Even the Greens thought the Bill has concerning flaws and that more time could have been allowed for consideration, consultation and debate.

The President of the Victorian Bar Association is quoted in Hansard as expressing the opinion that: “The Bill confers on the health minister in a practical sense an effectively unlimited power to rule the state by decree, for effectively an indefinite period, and without effective judicial or parliamentary oversight …”

The Bill allows the Minister for Health to make any order he/she believes reasonably necessary to protect public health. These powers are otherwise unlimited but include orders to require persons to be detained, restrict movement or prevent or limit entry to a pandemic management area, prohibit or regulate gatherings whether public or private, require the use of personal protective equipment, prohibit or regulate the carrying on of activities, businesses or undertakings, require the provision of information (including information about the identity of any person) the production of documents or the keeping of records or require the medical examination or testing of persons.

And an Order may differentiate between or vary in its application to persons or classes of persons identified by their participation in or presence at an event. So attending a peaceful protest could make a person subject to the orders or directions including detention? An Order can also differentiate in its application to persons or a class of person because of an activity that they have undertaken or are undertaking. Would this include social media comment? An Order can also discriminate against persons or classes of persons on the basis of their “characteristics, attributes or circumstances”.

The Minister must establish a committee, to be known as an Independent Pandemic Management Advisory Committee. Its function is only to provide advice and any recommendations it may make are non-binding. The Minister can accept that advice or those recommendations or not as he/she decides. This is not the bi-partisan parliamentary oversight that is needed in relation to the exercise of wide reaching emergency powers.

If the present powers of emergency in the Public Health and Wellbeing Act, under which Victorians have been locked down for extended periods over the last 20 months, are not adequate to manage pandemics then legislation to make adequate provision should be developed. However, this short sighted but overreaching, complex and micro-managing Bill that the government has presented to the Victorian parliament, with little consultation and certainly no public debate, is not the solution. There needs to be bi-partisan discussion and public consultation on the shape of any proposed legislation.

The Bill is posing a political response to what should be managed as a health issue. The response to any future pandemic must focus on health measures to protect those most at risk and not lock up everyone in the vain hope that will prevent the spread. The response should be directed to protecting the vulnerable, treating the sick and allowing the healthy freedom of movement and activity and giving them clear instructions as to their responsibility to manage their health by recognising symptoms and immediately seeking medical attention/advice.

The Bill should go to a parliamentary Committee for close examination and an inquiry allowing for public consultation.

Click here for a detail briefing on the Bill.