You are here:
West Papua 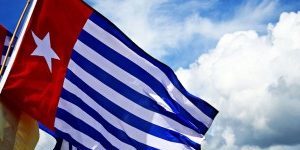 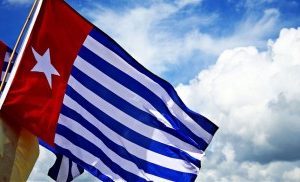 The 1st of December, marks West Papua’s original independence day when the Morning Star flag was first raised in 1961.

The Dutch had prepared West Papua for independence. However, within months, the Indonesian military invaded – determined to include the resource-rich land as part of their nation.
The United Nations declared that West Papuans were to be given the “opportunity to exercise freedom of choice” through consultation and a referendum, with voting rights for all adult males and females. However, it was only a bogus referendum that followed, with 1026 Papuans (out of 1 million) picked to vote in 1969. Under severe duress, including threats of torture and death, they voted to remain part of Indonesia. The UN shamefully sanctioned the result.

Since then, West Papuans have been slaughtered, tortured, raped, culturally oppressed, discriminated against, denied the most fundamental freedoms and have seen their homes burned to the ground.

The Morning Star flag is recognised as the national flag of West Papua and continues to be the defining symbol for a Free West Papua – “Parpua Merdeka”. Today it is illegal to raise this flag in West Papua and people who do face arrest, torture and long jail sentences. On this day, people from around the world raise the Morning Star flag to stand in solidarity with the West Papuans. Over the past several years the international community, including a number of the Pacific nations, has become increasingly aware of the West Papua situation and is advocating for their freedom.

The Democratic Labour Party maintains its position that there must be a new, and proper, vote for independence by the indigenous people of West Papua.

In keeping with our long held position the DLP calls on the Australian Government ro show support for the plight of the people of West Papua by establishing a West Papuan Solidarity Day, including a public raising of the Morning Star Flag on 1 December each year until a United Nations supervised free vote is held.

The Democratic Labour Party Federal Secretary, Stephen Campbell, states that the DLP believes there has been a decades long cover up by consecutive Australian governments who have turned a blind eye to the sufferings of the West Papuan people in return for favourable treatment by the Indonesian government.

“West Papua was forcibly annexed by Indonesia in 1962 and since that time the West Papuan people have suffered from atrocities such as torture, murder, rape, oppression, forced removal of their children, and other crimes against humanity by the Indonesian authorities.”

“Surely history has taught us that no good can come by ignoring the sufferings of oppressed people” Mr Campbell stated.

“How can we, as Australians, deal with any nation who can invade a neighbouring country then treat the citizens of that country with the sort of inhumane treatment the Indonesians have handed out to the West Papuans? Has East Timor taught us nothing?”

The Democratic Labour Party is calling for all political parties to join them in their call for a nation-wide Solidarity Day in support of the West Papuans commencing on December 1st 2017 and continuing until a free vote is held under the supervision of the United Nations.

Where’s the commitment to help our tortured and oppressed West Papuan neighbours?
26/07/2013

Atrocities in West Papua, but our government continues to turn a blind eye
14/07/2013