Where’s the commitment to help our tortured and oppressed West Papuan neighbours?

You are here:
FeaturedWest Papua 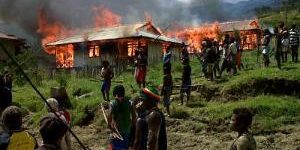 In the previous West Papua post, I provided an overview of the history of West Papua and the atrocities that have been inflicted upon Papuans by the Indonesians. In this post I will talk more about why Australia has been ignoring the issue, and who in our Parliament has been taking a stand.

Diggers will tell stories of Papuans running under heavy Japanese fire during World War II to pick up wounded Aussie solders bringing them to safety.

But for over 40 years, Australia has been ignoring the plea for help of the very people who risked their lives with outstanding bravery to save our own.

Australia’s position solidified in 2006, when the Howard government signed the Lombok Treaty with Indonesia, reaffirming the recognition of Indonesian sovereignty over West Papua, a position held by successive Australian governments to this day. Indeed, this was reiterated by Kevin Rudd in a meeting with the Indonesian president in July 2013.

When it comes to West Papua, all we have done over the years is express ‘concern for human rights in the region of Irian Jaya’ (West Papua), but not once has it been taken as a serious issue.

But let me be crystal clear: Australia has moral and legal obligations to pursue, through its close relationship with Indonesia, an end to the atrocious human rights abuses happening there.

Australians want action on this. A Newspoll survey in 2006 found support for West Papuan self-determination to be over 75%.

Thankfully, there are some members of our Parliament who doing what they can to help our abused, oppressed and forsaken Papuan neighbours.

Two minor parties in Parliament have found in each other unlikely allies: the Greens and the Democratic Labour Party (DLP).

Last year, DLP Senator John Madigan moved a motion that the Senate expresses its condolence at the death of Ms Vikki Riley, a campaigner who dedicated her life to helping refugees and the people of West Papua and East Timor. The government and opposition failed to support the motion, because Ms Riley’s involvement with West Papua was “in conflict” with Australia’s foreign policy.

And because the motion contained the name “West Papua”, instead of the Indonesian name “Irian Jaya”.

The DLP and the Greens have continuously been questioning the Foreign Minister on Australia’s involvement in promoting and encouraging human rights in West Papua. The usual responses have been less than satisfactory, no surprise there.

Unfortunately, one of these two parties has been playing politics and not the issue.

In November 2011, DLP Senator Madigan supported a Greens motion in support of West Papua, which was knocked down by the house, but the Greens did not return the favour when Madigan put up a similar motion only moments later. See Hansard pages 9502-9504.

While the Greens website outlines a general commitment to human rights and justice, the DLP website clearly shows the Party’s commitment to West Papua, with practical steps that can be taken. You can read the DLP policy here.