The DLP: an Authentic Labour Party 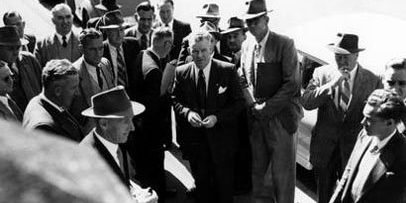 There is no doubt that the Democratic Labour Party (DLP) is a Labour party. For over 130 years, our party has maintained and promoted the Labour movement traditions that are good for the worker, the family and the community.

Indeed, we date back to the colonial pioneers of the original Australian Labour movement that began in the 1890s. At a time when wages and working conditions were degrading and inhumane with working families faced social injustice and poverty, it was the Labour movement that mobilised, formed governments and enacted legislation to achieve a “fair go” for workers and their families.

Under the inspirational leadership of Labour Prime Ministers Andrew Fisher, John Curtin and Ben Chifley, the movement introduced moderate-reformist policies that benefitted the worker, families and the nation.

You might be thinking, but didn’t the DLP only come around in the 1950s when it split from the Australian Labor Party (ALP)? Well here’s the thing: it was actually the ALP who, when it sided with the communists, betrayed and abandoned the Labour movement.

During the Second World War, the Communist Party of Australia commenced a takeover of the Labour movement. It won control of a number of important trade unions which wielded significant influence over ALP policy.

Ordinary Labour people organised industrial groups (‘Groupers’) to oppose the communists in trade union elections. By the mid-1950s, the communist control had been curbed in all but a few unions. However, when Dr Herbert Evatt was leader of the ALP, the success of the Groupers was reversed.  He sided with the communists, supporting them in both the trade unions and the ALP.

In 1955, communist sympathisers organised a coup against those anti-communist members who defended Labour traditions. Dr Evatt and the Federal ALP refused to recognise the legally constituted branch and executive of the Victorian Branch (from which a minority of 9 Evatt supporters had resigned). The Federal ALP then unconstitutionally elected a new, pro-Evatt Victorian executive at a special conference. This new Executive had no legality.

Labour movement traditions of democracy, justice and fairness had been subverted. The ALP’s policies changed to reflect the views of extremist union bosses with reckless economic agendas and allegiances to hostile communist regimes.

However, true Labour members took a stand. The remaining majority of 16 of the Victorian ALP executive members and over 200 of the 300 ALP branches, with 25 members of State and Federal Parliament, continued as the legal ALP in Victoria. Although they became publicly known as the Victorian ALP (Anti-Communist), court actions failed to upset their legal claim to recognition as the Victorian Branch of the ALP. Accordingly, the party retained that legal title when it became the Democratic Labour Party in 1957. In 1960, in a case between the DLP and the ALP, the Supreme Court of Victoria found in favour of the DLP, the legitimate Labour Party.

A total of 51 members of Parliament around Australia were prepared to sacrifice promising political careers to uphold their anti-communist principles. In the 20 years after 1955, the DLP held the balance of power in the Senate and kept the communist controlled ALP out of office.

From 1978, the DLP played a diminishing role in Australian politics but has made a resurgence in recent times. This resurgence is due to the rise of extreme socialist parties like the Greens and the rise of cultural Marxist influence in the ALP and trade unions.

We offer a distinct alternative to the other political parties. As a true Labour Party the DLP supports the family unit as the most important part of Australian society; we protect the rights and conditions of workers; and we defend the community and the nation against extremists.

We oppose the extremes of both state socialism and unfettered capitalism. We believe that the state and the economy exist to serve the people and not the other way around.

The DLP’s Constitution contains a series of Principles, Objectives and Perspectives that form a significant, cohesive ideological framework for a fair, prosperous, self-reliant and secure Australia and a decent society for families.

Our policies are consistent and comprehensive. We were the first political party to promote:

To this day, our policies are formed to be good for the family, the worker and the community. We always have been and always will be a Labour party. We have always protected and always will protect traditional labour values and principles.

Read more about our Policies

Read more about our Principles