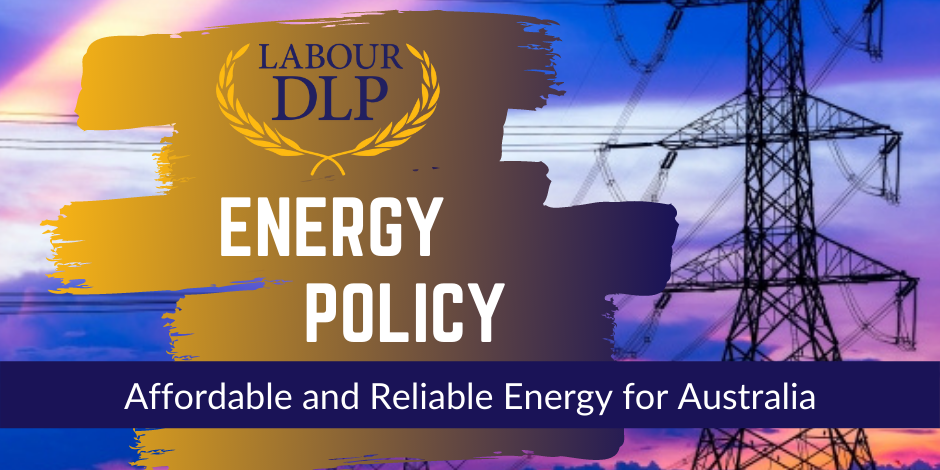 The DLP believes that the earth’s climate is constantly evolving through naturally occurring events, such as solar cycles, movement of ocean currents and volcanic activity, among other natural factors. The DLP rejects the hysterical mantras surrounding anthropogenic climate change as promoted by the World Economic Forum’s “Great Reset”, which posits that human-induced CO2 emissions are leading to catastrophic global warming and an increased severity and frequency of natural disasters.

The DLP Energy Policy is based on energy production that promotes the lowest cost and most reliable form of supply. While advocating for High Efficiency Low Emission (HELE) coal-fired power stations we recognise the need for adequate measures to reduce particulates.

The argument for battery backup of a “renewables-based” grid has been discredited. An article in The Australian on the Industry Super Australia report “Modernising Energy Sectors: A Guide to Long-Run Investment Decisions” has found that backing up a nationwide renewable energy system for a mere 1½ days would require the building of a hundred Snowy Hydro 2.0 schemes at a cost of $700 billion or Tesla batteries at a cost of $6.5 trillion. This is clearly unachievable.

Energy resources such as natural gas and oil are the property of the Commonwealth and States, and therefore, the people of Australia. Australian governments licence exploration companies to extract these rich resources from the ground. No company has the sole right to sovereignty over these resources, or a right to dictate whether a government can, or cannot legislate to protect essential services or supplies such as natural gas for domestic and industrial use.

The DLP supports connecting all capital cities into a national gas network.

We promote and encourage gas to liquid (GTL) fuel production in-country as part of a program increasing Australia’s self-sufficiency in energy. This is a viable fuel alternative which can be used in the production of distillate fuels. GTL is less polluting than crude-based oils. It produces a range of fuels from high quality diesel to aviation fuel, kerosene and base oils.

The DLP supports a reservation policy for Australia’s natural gas, whereby a portion of natural gas extracted is reserved for the domestic market at a low, set price. Evidence of the effectiveness of this policy in reducing prices can be seen in the price difference between Western Australia’s 15% gas reservation policy and the east coast market linked to the Asian LNG spot price. Since 2015-16, Western Australia’s price has fallen by 20% whilst the eastern market’s price has risen by nearly 90%.

With a reservation policy those states or areas reliant on natural gas for electricity production could have much more affordable energy.

We encourage LPG as an alternative vehicle fuel which could minimise harmful vehicle emissions such as carbon monoxide, sulfur and nitrogen oxide, and 50% less likely to contribute to smog. Our policy would encourage an uptake of a domestic LPG vehicle market.

We oppose gas import terminals as we are the largest gas exporter in the world, therefore the need to import gas is baseless.  Having a domestic gas reserve with a low Australian price negates the problem of being tied to a potentially high and wildly fluctuating international gas price. An interconnected pipeline network would reduce the cost of transport of gas from remote gas fields across the country, and alleviate the requirement for imports from overseas places such as Singapore, as per the five gas import terminals planned for Australia.

Ethanol and Other Biomass Fuels

DLP’s policy is pro-active in assisting Australian small businesses and industry, encouraging research, production and use of new ethanol fuel technologies and removing unnecessary red tape and “green” regulations, and barriers to entry into the market.

The DLP is concerned about Australia’s fuel vulnerability within our own strategic region, and believes we must dramatically boost fuel supplies, holdings and pro-actively commit to ensuring the survival of an in-country fuel refining industry.

The DLP believes that mounting tensions within the South China Sea and Indian Ocean would impact ‘Just-In-Time’ fuel delivery from the Middle East and South East Asia.